The Village of Swansea … looking back

Swansea is that green hilly area in Toronto, Ontario, Canada bounded on the west by the Humber River, on the north by Bloor Street, on the east by High Park and on the south by Lake Ontario. On the first maps used by French explorers, this area was known by its Mississauga tribe name “Toronto”, the meeting place. The Iroquois name for the major settlement in the area was Teiaiagon.  Swansea is rich in indigenous history. Swansea Town Hall acknowledges the land we are on is the traditional territory of many nations including the Mississaugas of the Credit, the Anishnabeg, the Chippewa, the Haudenosaunee and the Wendat peoples and is now home to 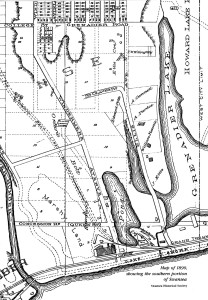 many diverse First Nations, Inuit and Métis peoples. We also acknowledge that Toronto is covered by Treaty 13 with the Mississaugas of the Credit.  Swansea traces its modern history from the arrival of Étienne Brûlé, a contemporary of Samuel De Champlain.  In 1615 Brûlé explored the southern reaches of the Humber River where it empties into Lake Ontario and established a French influence in the area, which would persist for almost the next century and a half. In 1670, Jean Baptiste Rousseau became the first permanent settler in Swansea when he established a trading post on the Swansea side of the Humber River, possibly on the site of the original French Fort.
Following the success of the British at the Plains of Abraham, English traditions gradually grew in Swansea. According to a popular legend, during the War of 1812 a determined but foolhardy band of British soldiers lost their lives trying to cross Swansea’s largest body of water during a February storm. Others say that no soldiers drowned there, but rather it was the red coated soldiers from the Fort that hunted and fished by the pond that gave it its name. Whatever the origin, that body of water has been popularly known since as Grenadier Pond.

During the latter part of the 19th Century, the area we now know as Swansea was called Windermere because, to the many immigrants from the British Isles, its hills, valleys, and seven ponds resembled the Lake Windermere area of the Lake District in the north of England.  No one seems certain as to how the community became known as Swansea. Some say it was because of all the immigrants from Swansea, Wales in the United Kingdom that settled here; others attribute it to the Bolt Works that carried the Swansea name. It is thought that the owner of the local Bolt Works, James Worthington, came from Swansea in Wales, so perhaps the truth lies somewhere in between.

In 1926, Swansea had grown to such a size that it was able to successfully petition to become independent from the Township of York and was incorporated as a village with a population of 3,255 persons and a superstructure of 908 buildings. By 1936, Swansea had grown to become the second largest village in the Province of Ontario. The Swansea Public School Board, Swansea Volunteer Fire Brigade, Swansea Police Force and Swansea Memorial Library Board were soon woven into the fabric of the Village. 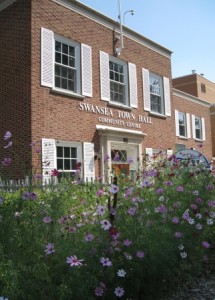 The Building At 95 Lavinia