The Swansea Memorial Library entrance is located in the main lobby of the Swansea Town Hall.

The Swansea Memorial Library is one of the smallest branches in the Toronto Public Library system. It was founded in 1919 as a memorial to the Swansea veterans (22 who died and 150 who returned) from World War I.  It specializes in material for children and seniors, provides complete inter-library loan services and free wifi.

The Swansea Memorial Library offers a limited amount of passes to cultural institutions like the AGO, the Museum of Inuit Art, City of Toronto Museums and the Textile Museum. The pass provides full admission for a family of up to two adults and up to five children, depending on the Museum. For more information please call or visit the branch. 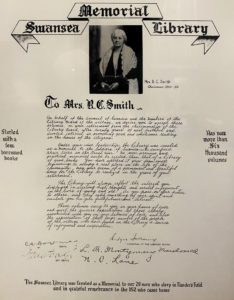 The Swansea Memorial Library came into existence in 1919 out of funds held by the Women’s Patriotic League who wanted “a memorial to our Swansea men who have-seen active service in the Great War”. A Library Association was established and a Board of Directors elected, with Mrs. R.C. (Mary) Smith acting as its first president. On November 30, 1919 Swansea Memorial Public Library officially opened. As a result of the 1920 Public Library Act, in 1923 Swansea Memorial became a Free Library under the control of the Rural School Board. When Swansea was incorporated as a village in 1926 there was another reorganization of the Library Board. The new board consisted of seven members: three appointed by Village Council and three appointed by the School Board, with the Village Reeve being an ex-officio member.

By 1930, it was decided that attendance at the Library warranted its opening five nights a week. In 1933 a long campaign was started to persuade the Village Council of the necessity for a library building. This matter was not resolved until 1959, when the library moved into its present location in what was then the Village Municipal Offices Building, (the building was renovated and renamed the Swansea Town Hall in 1993). Also in 1959 a new operation arrangement with the Toronto Public Library began. The year 1961 saw the start of regular visits by classes from Swansea Public School (to be introduced to the atmosphere and use of the public libraries). In 1967, the Village of Swansea Memorial Library Board ceased to exist and management of the library was taken over by the Toronto Public Library Board.  Read more about the history of the library from this brochure printed when the newly renovated Swansea Town Hall opened.

The Swansea Memorial Library is still very much a neighbourhood branch where a friendly village atmosphere exists. Swansea Memorial Library, one of the smallest branches of the Toronto Public Library, may never reach the size of other Toronto Public Library branches but it has nonetheless won a secure place in the life of the community. It is a place where people of all ages turn up to work, learn and enjoy themselves.

There is a library return slot located to the left of the front building entrance on Lavinia Avenue.

When the library is closed and the building is open, there is also a return slot located in the main floor lobby, to the left of the Library entrance.

When the library is open and staffed, you may hand your returns directly to a library staff member.